FRIXION BALL (friction ball) The color disappears when you rub with the rubber on the top of the pen.

How about this? I wrote it on black origami. Its color is colorless. I wonder if colorless is white.

Colorless ink is not sold. Naturally you will make it yourself. It has become. 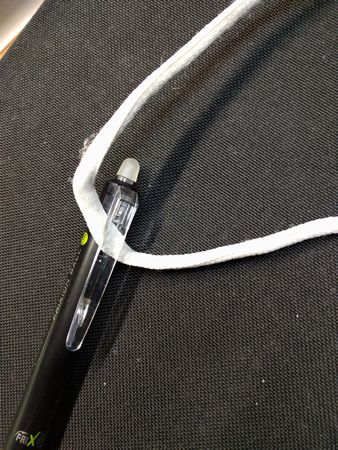 I bought FRIXION BALL about two years ago. I noticed that I forgot the writing instrument on the road, and I didn’t have a ballpoint pen that I could erase, so I thought it would be useful, so I bought it at Seven-Eleven.

I didn’t find a receipt so I can’t return it.

I forgot to put it in the brush as it was.

About two years have passed, and I turned over the brush, and FRIXION BALL came out.

I don’t think I was using it only once, but I was used up only once and I was bored.

I tried it with color before finally throwing it away.

First of all, I tried to write with a slight tilt. This is because the round ball at the tip of the ballpoint pen may not be spinning.

When I tried to write on the notebook, I couldn’t write the letters just by cutting the paper with pressure.

The second thing I tried was to warm the pen shaft with the warm air from the dryer. This is no change.

The third thing I did was try hooking up a shoelace as shown in the image above. This is a countermeasure for when the pen shaft is filled with air and cannot be written.

There is also a method of running on a bicycle spoke (centrifugation).
This was no good either.

The black color has changed to colorless

It can not be helped. I thought about throwing it away.

Suddenly, I read a note on the FRIXION BALL itself.

■ Do not use for anything other than writing. (Well so)

■Do not leave it under high temperature. When the temperature exceeds 60 ° C, the ink becomes colorless.

This is it! Speaking of which, I bought it in midsummer. I remembered that I left it in my car the day I bought it.

That was it. I immediately searched for black origami and wrote it. Colorless.

It was good not to complain to the manufacturer. It was a shame.

Therefore, it can be colorless if left at a temperature of 60 ° C or higher.

The writing color is not so good because of the special ink.

I usually use JETSTREAM 0.5mm, which has good writing quality.

Tomorrow is September 1st. The beginning of the new semester. Isn’t it okay not to start tomorrow?

The second semester begins from tomorrow. There may be many children who are desperately doing homework nowadays. Th...

There’s one thing I want but not a flashlight mania

Since there were various kinds of lights such as flashlights, I summarized them. The most recently purchased is the top...

I went to Nagatoro rowing a canoe after a long time in Obon I went through the raft of the Nagatoro line of Chichibu Ar...

I went to visit the grave today A picture of my father I worked as a sushi restaurant and a real estate agent (until...

Sotaro goes on an expedition in 3 days and 4 days from today to participate in the “All Japan Junior Soft Tennis Tourn...
Spring Uraraka Edogawa Canoe
Give Ryusuke Koyama “Future Remodeling Plan for 20’s Exciting in 10 Years” to Children
ホーム
blog(English)