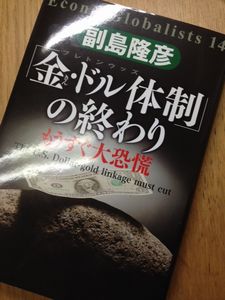 I read Takahiko Soejima’s “End of Gold and Dollar System”

I will not touch on the contents, but the band says, “The big bank in Europe 20 will be crushed. Gold will aim for 8000 yen per gram next time.”

He is a critic who does not appear on television. (In other words, it is NG on TV)

There are no real critics on TV and the general media

The truth / the truth cannot be played on TV

In that sense, he is a real critic (aside from the correct and incorrect contents and remarks)

Do you believe it or not?

It ’s up to the reader to decide

I went there because Onechan's work was exhibited

Tokyo Marathon 2013 After all, you must practice before you finish

The morning of the day of February 24 is a habit. Last year, when Kasumi was back in the marathon, he left the house ...

Today, I went to UNIQLO to buy some children's T-shirts My son doesn't have any jeans because he doesn't like jeans. S...

It is not suitable for such a person.

Occasionally I meet people who make me feel that I have never lived for more than half a century. If you don't do it,...

The other day was my daughter's 20th birthday The cake was bought by my mother this time without any special celebrat...
Son’s exam
Read “East Sports Golden Legend”
ホーム
blog(English)