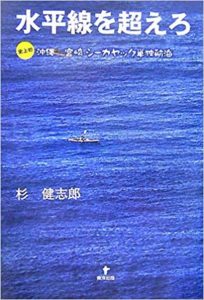 The first ever book on Okinawa-Miyazaki Sea Kayak

It is an adventure to Miyazaki, my hometown

In particular, the fierce battle from the last Tanegashima across the Oiso Strait to Kyushu is amazing.

The coasting distance is about 75km / hour for 16 hours. I was riding a canoe until after midnight …

“If you stop rowing, everything will end.”

I do n’t know because I ’ve never been able to crawl like this.

I’m the only river, so I can see both banks. Even if it sinks and swims, it reaches somewhere.

When I sink, I ride the Kuroshio and I do n’t know where I ’ll go.

I saw Shin Godzilla and realized that what I lost as an adult was imagination.

So my son goes back to tennis

I was surprised when I played the clarinet, No way ~~~ ==== I moved to the club during this time of my second year ...

I got it from my daughter

What is Valentine's Day? I got it today. .

I went to Nagatoro rowing a canoe after a long time in Obon I went through the raft of the Nagatoro line of Chichibu Ar...
Mantaro Kubota Kodemari shou
father
ホーム
blog(English)