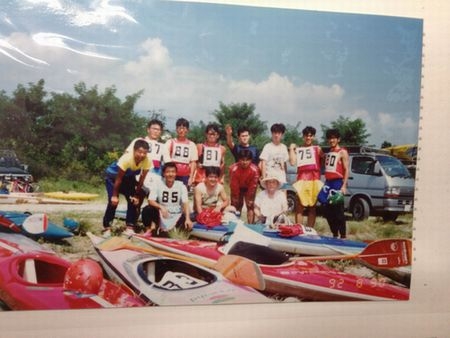 I haven’t been able to do it recently, but Piranania @ Yamada’s canoeing history is from the first year of high school.

Kakeko and canoe became a boom when the CM of Tossuke Noda riding a dog on a canoe and rinsing Nissin chicken ramen in the catch of “Delicious immediately, very delicious.”

It ’s rare to be a high school student doing a canoe.

I wasn’t doing it in the club activities of Koko.

The teacher who was indebted to Sugok still belonged

I was in a team of working people.

That’s why one of our KOKO’s first-year seniors, piranha @ Yamada’s classmates (only for those who have survived so far), about seven, and one younger junior about seven.

One year seniors were almost exceptional, so I went to stay at a camp in Saitama every Sunday with the piranha @ Yamada and a group of people under one, and on Sunday, I went to the seniors of adults on the upstream of the Tama River And I was sent to Chichibu’s Nagatoro to row my canoe all day long.

“I have never paid a sen” for 3 years in high school where I had a lot of canoeing days when there were only a few people that I could n’t believe.

Our gluttony and everything was borne by the adults.

It was a good time.

It’s easy, but it seems that it took millions a year (later talk)

The canoe corps became a member of society and in 1991 (26 years old) away from the canoe, old members gathered and participated in the “All Japan Tenryu River Canoe Tournament” (Nagano Prefecture).

The Tenryu River is a river that originates from Lake Suwa, but it’s a fun river with a lot of water and Sungoi water, even though the river is wide

(If the typhoon does not come) You can do canoe.

It is also a river that I thought of as a high school student who participated once and camping for 4 nights.

I’ve been camping 20 years ago, but I never had a campsite. I always set up my tent on the riverside and the side of the parking lot.

A blue industrial tarpaulin is laid on the Tenryu River to secure an area of ​​6 tatami mats, and stones are brought from the river to make a pot door, making it feel like a high-solade dayo.

There are only two tents, one for climbing three-person tents for climbing, and the other one made of industrial waterproof sheets on the bottom sold at discount stores.

After that I had to sleep in the car or sleep under the sky full of stars.

It ’s really hot. I tried cracking an egg with my car Pajero’s bonnet, but it was too hot and the whites were stuck together.

Enjoying camping is a dinner! Piranania @ Yamada and other canoe corps has a role sharing with nature. Piranha @ Yamada is planning a camp and convening members. I’m in charge of Pirania @ Yamada brother.

Tozen We were to follow the royal road faithfully to the basics.

I decided to make curry in advance, so Piranha @ Yamada bought curry roux and cooking utensils at the discount store, and then started cooking with vegetables and liquor at the local supermarket.

When rice cooking started, those who had no trouble started to drink sake.

Our camp was called “Ohanami Camp” by other participants. (That ’s a good name, because there ’s only a waterproof sheet. I do n’t think it ’s going to rain at all.

What really are those who are funny?)

Koga (reformer) asks the chef of sweat ducks, “Do you have a little curry yurk?”

(I forgot to write, but curry roux had 50 servings for business)

It is too hot this time when the roux melts and tastes again.

“Now, do you want to dilute it?” “I repeated all of these things several times and I put all of my business-use rou into the pan.

I ended up making about two buckets of curry.

There are only 10 members, but 2 buckets!

It was dark and I couldn’t see it well (I didn’t have a lantern in the early days), but the curry was like a fattening eel

I have never eaten so much curry since then.

Curry gep is a habit.

It was a good

My daughter now works part-time at a foreign-affiliated hotel Reception work for parties and parties The crown of Eb...

I got it from my daughter

What is Valentine's Day? I got it today. .

(Cozy corner Christmas cake) Merry Christmas! My daughter is a first year university student next year My son is a ...

Hina festival today Have a cake Cozy corner The photo below is what I ate on the 22nd of last month (Cozy Corner) Si...

Child (son) writes a blog I recommend that I write, I use my own domain and run it on WordPress I sometimes peek at ...

Merry Christmas! One day earlier, yesterday we had a hand-rolled sushi party with children After all, there were few ...
2006 Summer homework Sotaro
Sotaro Draw on PC
ホーム
blog(English)