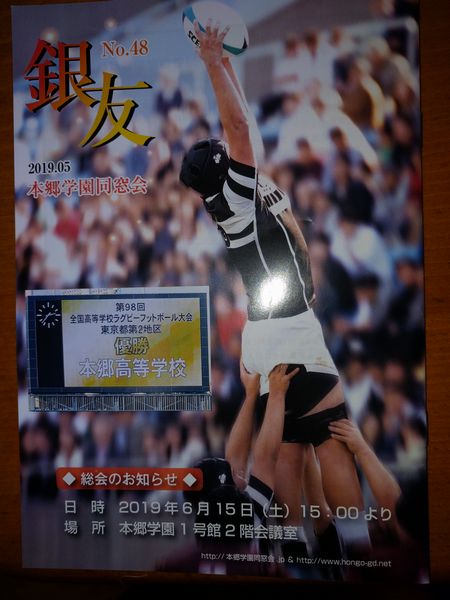 I wrote long ago that “Rugby is not going to rise in Japan”.

The above image is this year’s alumni magazine of my alma mater. Since it became the first national tournament Hanazono in 8 years, the post of five rugby club OBs and the post of former rugby representative from Japan, Ryota Asano has been published, and it has become an alumni magazine filled with rugby. It was. Only our high school is exciting!

However, it has been a little over 2 months until the start of the Japan Rugby World Cup 2019 on September 20th, but it hasn’t been excited nationwide.

There is also dark news.

I’m pouring water from my relatives, so I feel dark.

That ’s why there ’s no magic bullet to revive rugby popularity.

The first is to make a storyteller for the Rugby World Cup 2019 Japan tournament.

Even after the World Cup is over, you can create a narrative section that tells you about the fierce battle. Naturally they are student lagermen. The story will surely lead to the future Lagerman.

If you are a college student, you can buy tickets for yourself and watch them, but it may be tough for junior and senior high school students and people living in rural areas.

This is a suggestion, but this year’s tournament has many companies representing the world and Japan as world wide partners, official sponsors and tournament suppliers.

Naturally, each company will distribute tickets, although it is not clear whether they are paid or free. Usually it will be distributed to business partners, but can this be distributed free to junior and high school students Lagerman? In other words, wouldn’t the local resident Lagerman cover the accommodation and transportation costs? I’m not sure if I will give it to my business partner. There is nothing sad about the vacant seats even though the tickets are sold out.

If they can distribute them to the ticket and other free of charge and they can watch the World Cup live, they will be the narrator of the Rugby World Cup 2019 Japan

From a company’s perspective, if you consider cost-effectiveness, I think it will have a great effect in the long run. For the rest of my life, she said, “I got a ticket from the sponsor ●● and watched it live!”

This time, the sponsoring companies will be posted

There is no help for those who see rugby as a dangerous sport. Because no one wants to see their child injured.

In that sense, parental understanding is essential to increase the rugby population. Especially mother.

The best thing is to actually get rugby.

That would be 7-person rugby

Seven-player rugby is an official event of the Olympics.

After all, girls are also official events in 7-player rugby.

We want you to aim at the revival of rugby popularity from a long-term viewpoint using this as a breakthrough.

Finally, rugby has an allure that no other sport has.

I think that players of various physiques and players with slow feet can be one team.

In soccer, baseball, and basketball, almost all players are agile, and even if they are physique, there aren’t many players next to them.

This is because there is no specificity for each position as rugby.

I think this is an interesting place

Lastly, whether the popularity of rugby will increase in the future will ultimately depend on the fight of the Japanese national team

I knew Nobukazu Kuriki's Everest Challenge in the CM of AbemaTV. (Although you can only see Shogi, there are some commer...

ould it be a substitute for Unagi? I tried to eat Pangasius said before the day

When I went to Aeon at night, the topic Pangasius was half price, so I bought it for a test. This year, the price of ...

Success is abandoned in a day Tadashi Yanai

Read Kozo Hamada, “How to Make a Step Money”

I made a donut from my daughter for the first time, so I got a phone call to eat when I got home. Immediately sent an i...

The book I read the most times, Kenichi Horie “Pacific alone”